Wondering if you can upgrade your laptop’s GPU and whether or not it’s worth it to try?

Generally, upgrading a laptop’s GPU is borderline impossible for the majority of laptops. It’s usually not worth it to even attempt to remove and replace a laptop’s GPU, even if you are very tech-savvy, but there are some rare cases in which it is possible. There are alternatives, though.

There’s no doubt that upgrading a laptop GPU is a practice that has long been shunned and which used to be impossible. Some say it still is or it just isn’t worth it.

Sometimes it isn’t so easy to just give up your gaming laptop and buy a desktop as so many PC users will be suggesting you do. Are we stuck then with our underperforming machines then?

Let’s dig into the details to determine whether or not your laptop is a candidate for an upgrade.

P.S. – We have a separate guide to determining whether your CPU or your GPU is the first thing that needs to be upgraded in your system.

Contents hide
1 Can A Laptop GPU Be Upgraded?
2 How To Upgrade a Laptop GPU
3 External Graphics Cards
4 Is a Laptop GPU Upgrade Necessary?
5 The Risks of Upgrading a Laptop GPU
6 In Conclusion

Can A Laptop GPU Be Upgraded?

The short answer is that most laptop GPU’s cannot be replaced. However, in rare cases with specific laptops and approved kits is this an option. Typically, an attempt to upgrade a common laptop GPU would result in catastrophic damage to the PC.

A few things need to be noted here in terms of what exactly upgrading your GPU can and can’t do.

For one, it is not going to extend the lifespan of your laptop. If it’s a 5-year-old laptop with an old GPU, upgrading it won’t do a whole lot to change that.

Second, not every single laptop out there can be upgraded. The reason for this is that sometimes (most of the time, honestly) a laptop’s GPU is integrated into the motherboard.

A motherboard-integrated GPU means it cannot be removed without replacing the whole motherboard. While technically doable, the thought of a laptop motherboard replacement usually means you should pretty much just get a new computer.

Note: We have a guide to onboard integrated GPU’s versus dedicated GPU’s.

Some manufacturers actually provide upgrade kits for their models though, so if you get a PC from a place such as Eurocom, you will have the option to upgrade whenever you want!

The problem here though is that most people get their laptops from more well-known companies like Alienware and MSI. The compromise of being able to upgrade your GPU sometimes doesn’t overwrite the doubt that can creep in when trusting an unknown name with your gaming laptop. So definitely don’t feel bad if you have a laptop from a household name.

If you have a less common laptop though, you may have some options, so as your GPU isn’t infused with the motherboard.

P.S. – Don’t forget about the potential to overclock your GPU or your CPU. Under the right circumstances, this can be a stopgap until you upgrade your whole system.

How To Upgrade a Laptop GPU

First off, we have to uninstall the graphics drivers. For this, we are going to download a program called the Display Driver Uninstaller which will get rid of anything related to your graphics card on you GPU.

Then, turn your laptop off and unplug it as well as removing the battery.

From here, the motherboards will all look different, but you should see a bunch of screws that need removing to continue, so continue to do that.

Once open, you should be able to identify your GPU. It will likely look similar to the one you are about to install.

Now, you need to identify if you have the spare slot that you can install your new GPU in. If there is one, you don’t have to worry about taking out your original one and possibly damaging the original one.

If there is no extra slot, simply remove the old GPU and place the new one in place of it. If this sounds too harrowing though, there is another way to upgrade the GPU:

If installing something internally makes you nervous (like you might be destroying your laptop by accident), you are likely not alone. Luckily, there is an option beyond that to try and upgrade the visuals on your system.

Using an external GPU quite the easy process too as you simply have to purchase your external graphics card and plug it in. From there, you install the required graphics drivers and get everything installed. Your initial GPU will remain in place; however we will now make all display options powered by the new external unit. This will make it so your PC is defaulting its visuals to your new and improved graphics card and therefore your gaming performance and general visuals in movies and whatnot should be vastly improved.

External graphics cards are a great option if you have the cash, but just know that these options can be quite expensive and are not as effective as their desktop counterparts would normally be.

In addition to this, an external graphics card might not be the only thing you need as a better power source might be necessary as well. According to research, your laptop will need 15 percent more power than what your card requires, so do the math accordingly with the card you are getting to figure out what kind of battery you will now need.

Is a Laptop GPU Upgrade Necessary?

The short answer is that you never really need to upgrade your laptop’s GPU unless you are a gamer that is stuck with a card 4 or 5 generations behind the modern models or your GPU is failing/dead. A less-than-ideal (but still decent) card is still capable of playing some of the most popular games out there in both VR and flat screen with little issue.

Check out our guide to GPU lifespan to help determine if your card is on its last leg.

The Risks of Upgrading a Laptop GPU

There are major risks involved with replacing a laptop’s GPU without an approved kit or replacing an integrated GPU. Motherboard damage is extremely likely, as very few laptops are designed to ever have their GPU removed and replaced.

All the luck to you if you go rogue and try to wing it. You are pretty much trying to achieve the impossible here as even if you might be able to replace the card, the likelihood that your motherboard gets wrecked in the process is exceedingly high and once you do that, its game over for your laptop.

If you are that desperate to upgrade, again, the external option is very safe, if not a bit pricy and inconvenient to lug around. They will give you a lesser upgrade than the counterpart that would normally be directly installed, but it’s a great option to give your laptop a temporary upgrade in performance and graphics if you are not looking to move a desktop.

Though a laptop GPU upgrade used to be effectively impossible in any circumstance, there is now a chance for laptop users to even the playing field here. Although these options for swapping out internally are limited, the external GPU can help realize the dreams of all those laptop gamers who were jealous of their friend’s gaming desktop sent from the heavens.

As with any computer procedure though, a ton of care should be taken before doing anything here as trying to run a graphics card without the proper power will result in some serious visual issues, so hopefully this guide will give you the information you need before you go melting your system down by accident.

The desire to upgrade is always present with PC users and sometimes the laptop users will be seen looking in from afar, dreaming about upgrade their system in the way that desktop users seem to do with abandon. 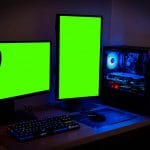 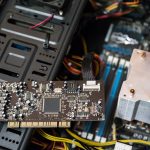