Wondering what thermistor cables are, how they work, and how to use them in your PC? We can help!

This quick guide will cover everything you need to know about what thermistor cables are, how they work, how to use properly use them, and if they are even worth making use of in your PC.

What Is A Thermistor Cable?

A thermistor cable, in this context, is essentially a cable used to monitor the surface temperatures of components inside a computer. Also known as thermal cables, thermistor cables are often included when users buy new motherboards, and occasionally come bundled with some other components.

Thermistor cables usually have a plug on one end and a flat sensor on the other. The plug end is typically attached directly to the motherboard, and the sensor end is attached to the component (either self-adhering or with tape) whose temperature the user wants to monitor.

Why Would You Need One?

Computers get hot. Components like CPUs and graphics cards consume a lot of electricity when they’re working hard, and some of that electricity is always released as heat. Heat generation is just a part of the deal, and every good PC owner knows how important it is to prevent that heat from overwhelming and even damaging their components.

There’s a whole host of cooling options out there—CPU fans, GPU fans, case fans, liquid cooling systems, heat sinks, heat pipes, undervolting (we recently created a guide specifically for undervolting) and other software-driven solutions, etc—all of which do a great job at keeping the insides of computers cool, but they’re a bit imprecise.

Fans can get annoying when they’re constantly moving air through computer cases (we also have a guide to help you optimize your PC fans and airflow), and so can the constant whining of liquid cooling pumps. It would be nice to be able to check how hot the inside of your computer was getting so you could set its fans or pumps to run only when you need them.

But there’s no way to know how hot your computer or its components are…or is there?

If you’re looking for a cheap, easy, and accurate way to monitor your computer’s internals then you might have come to the right place. Thermistor cables are cheap, easy to install, and claim to give accurate temperature readings in real time, so they should be exactly the solution you’re looking for, right? Unfortunately, things aren’t quite that cut-and-dry.

So, do thermistor cables work as advertised? Are they worth it? We’ll dive further in to help you determine if/when/how to use them.

What Is A Thermistor?

A thermistor is a type of electrical resistor with a temperature-dependent resistance level, meaning it conducts more or less electricity depending on how hot or cold it is. They were first invented back in 1833 by Michael Faraday (the Faraday Cage guy), though they were so hard to engineer it took almost another century before a man named Samuel Ruben made them commercially viable. Since their commercial adoption in 1930, thermistors have become important to many different industries.

NTC thermistors’ resistance decreases at higher temperatures and are usually made from rods, discs, or cast chips of semiconducting material. NTC thermistors are typically used as temperature sensors, and have found their way into cars, consumer electronics, digital thermostats, 3D printers, and even commercial food storage systems. The thermistor cables referred to in this article are almost certainly NTC thermistors.

PTC thermistors, on the other hand, gain resistance when the temperature rises, and are usually made from materials like silicon or doped polycrystalline ceramic. PTC thermistors are often used within circuits to limit electric currents above a certain level, as protection circuits in lithium batteries, as heaters in diesel-powered trucks, and in all kinds of electric motors and power transformers.

How to Use Thermistor Cables

If you don’t have your manual on hand, try looking near the bottom of the board for any unoccupied headers, then see if your thermistor cable’s plug will fit. Just make sure your computer is unplugged before you do—getting zapped tends to ruin one’s day.

After you check to make sure your motherboard has the right headers for a thermistor cable, the next step is to decide where you want to attach your cable’s temperature sensor. CPUs almost always come with built-in temperature sensors, as do almost all graphics cards and many motherboards, but they aren’t the only components that can be damaged by excessive heat.

Hard drives and solid-state drives slow down, become unstable, and can even fail completely when they get too hot, RAM sticks can become warped and may break if they overheat (though this doesn’t happen very often), and overheating power supplies may suffer from lowered performance, wear out more quickly, and potentially even fail completely.

Wires, circuits, and connectors aren’t immune from excessive heat either; wire casings may melt, circuits can warp, and connectors may become dislodged with no obvious way to fix them. And in the absolute worst-case scenario, an overheating computer may suffer a series of catastrophic events that lead to either total system failure or short circuit and potentially start a fire.

The best way to prevent thermal damage to your computer is to set up an adequate cooling system, but that isn’t always enough for some users. Cautious users don’t like to leave their computer’s temperature up to chance, so they install thermistor cables inside their computer case either to monitor its ambient temperature or the surface temperature of specific components.

Once you decide on where to place your thermistor’s temperature-sensing side, all you need to do is attach the sensor to your component of choice using a piece of thermal tape—or at least some kind of tape that won’t melt when things start heating up. When that’s done, all that’s left is to boot up your PC and figure out which temperature monitoring utility you want to use.

The required software will often be included with the motherboard, mentioned in the manual, or available as a free download from the motherboard’s manufacturer, but this is not always the case. If the software you need isn’t pre-installed or readily available, there are a few open-source programs that will do the job.

It can be a bit difficult to tell whether a monitoring software will work with your thermistor cable (as opposed to just monitoring CPU, GPU and motherboard temperatures), however, so it may take some trial and error before you find one that works for you.

Now that you know a bit about what thermistor cables are and how to use them, it’s time for a few recommendations.

Are Thermistor Cables Worth It?

Posts on forums, Q&As, and Reddit comments give you the impression that computer enthusiasts are not exactly enthusiastic about thermistor cables. The consensus seems to be that they’re given away for free for a reason; properly calibrated thermistors can be incredibly accurate, but the simple ones used in computers are neither properly calibrated nor particularly accurate. Thermistor cables are completely optional, and many users seem to think they aren’t worth the hassle of installing them.

The good news is that thermistor cables are very cheap. The bad news is that it may be kind of tough to find a good thermistor cable if your computer’s components didn’t come with any. It’s not that there aren’t any on the market—there are plenty—it’s just that looking for a specific electrical component is like looking for a needle in a haystack if you don’t know precisely what to ask for.

Here are a few options to get you started, and remember that you’re looking for a temperature sensor with a 2-pin plug that isn’t designed for 3D printers.

This cheap thermistor cable is 50cm long, perfect for use inside a computer, and users on Amazon have confirmed that it works with their motherboards.

This one is very similar to the XSPC sensor above, but it’s a little longer (80cm instead of 50cm) and a little pricier. Users have also confirmed this one works with almost all of their motherboards.

This sensor is designed to monitor the temperature of water cooling loops, which makes it much easier to keep track of how hot your liquid cooling system is getting.

After all, the CPU and GPU generate the most heat during operation, so monitoring their temperatures should be enough to prevent the whole system from overheating. Instead of installing thermistor cables and configuring their software to interpret the temperature data, many users simply prefer to invest a bit more into their cooling systems.

It’s up to you whether you want to invest the time and money into installing thermistor cables in your computer, but you should really do some more research to make sure you won’t be wasting your effort. 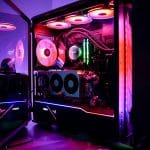 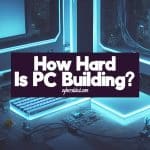