Wondering if an SSD is really worth it when compared to a cheaper traditional HDD hard drive? We’ve got the answers you need!

Generally, SSDs are almost always worth it, even though they are more expensive than traditional HDDs. An SSD will be much faster, more reliable, more efficient, and save space compared to a hard drive. Usually, the only reason to choose an HDD over an SSD would be to save money on very large storage capacity.

That’s the short-and-sweet answer, but there are some important considerations/recommendations before you decide what’s going to work best for your PC (and budget).

This quick guide will dive deep into the details that actually matter for you. When you’re done here, we guarantee you’ll know exactly whether or not an SSD is worth it for your PC.

By the way: Before you commit to buying an SSD, we highly recommend reading our guide to the performance differences between M.2 SSDs and 2.5″ SATA SSDs. It’s a big deal, but often overlooked when choosing a drive.

Contents hide
1 Solid-State Drives vs Hard Drives
2 When is an SSD Worth It?
3 Types of Games That Benefit Most from SSDs
4 When is an HDD Worth It?
5 Are SSDs Reliable and Long-Lasting?
6 History of SSDs
7 Conclusion

Hard drives (HDDs) store data on spinning magnetic discs. The discs are durable, offer huge amounts of storage space, and can be easily overwritten, but they’re too slow to keep up with even the weakest modern CPUs.

The fastest HDDs spin at up to 15,000 RPM, and it takes a good HDD about 10 to 15 milliseconds to read and access data, which seems pretty fast…until you realize that’s millions of times as long as it takes an average CPU to complete an action. These rotational and mechanical limitations also severely limit HDDs’ read and write speeds, with all but the most expensive models barely able to reach 200MB/sec.

Solid-state drives do things a bit differently. Instead of spinning discs, SSDs store data on non-volatile chips packed with NAND flash memory cells, which offers a number of tangible benefits compared to HDDs.

The lack of moving parts makes SSDs operate silently and makes them more resistant to physical damage, and their flash memory cells consume less power than an HDD and are easier to miniaturize for use in laptops and smaller devices. Flash memory also offers significantly faster read/write times compared to HDDs.

Standard 2.5-inch SSDs are limited to transfer speeds of 600MB/sec by their SATA interfaces, but newer SSDs have gotten around those limitations by utilizing the much faster PCIe slots and optimizing performance using the NVMe protocol.

Matter of fact, today’s best PCIe NVMe SSDs can reach read and write speeds of up to a blistering 7GB/sec.

Here’s a quick comparison to show you just how drastic the difference can be between the read and write performance of PCIe NVMe SSDs and HDDs:

The Seagate Exos 2×14 has billed itself as the fastest HDD in existence. It can reach sustained read and write speeds of up to 524MB/sec.

The Kingston KC3000 is another monster performer. It can reach read and write speeds of up to 7GB/sec, 13.36 times as fast as the Seagate Exos 2×14.

That’s great and all, but those numbers don’t mean much without context. The next sections will give you the specifics on all the benefits from going with a SSD over an HDD.

When is an SSD Worth It?

SSDs’ lower power requirements, silent operation, and greater physical durability are all important benefits, but they pale in comparison to the real benefit: Speed.

Having faster storage is a bigger deal than you’d think.

Your computer accesses its storage all the time; booting up the operating system, loading programs, saving and retrieving files, and all kinds of other operations that happen under the hood. You may have heard that having an SSD makes your computer boot up faster, but you may not know just how much faster.

A computer with an SSD can do a full restart in a matter of a few seconds and can log you onto your user profile in the blink of an eye, and that’s just the start. You can install the biggest applications in seconds. Programs load instantly. Files are open and at your fingertips as soon as you click on them.

Computers with HDDs will seem like they’re working in slow motion. You’ll never want to go back.

Types of Games That Benefit Most from SSDs

Gaming performance is no doubt one of the biggest considerations that factor in to many users deciding on storage for their PC.

Without question, SSDs are worth it for gaming. This is especially true for games that have lots of loading screens, large maps, or are texture-heavy. The difference loading games on an SSD vs an HDD is substantial.

Strategy games like Total Warhammer, open world RPG games like The Witcher or Elder Scrolls, racing games with large maps like Forza– these are the types of games that have massive performance increases with an SSD.

Even relatively lightweight competitive games like Valorant, League of Legends, Rocket League, Apex Legends, etc, will have some noticeable gains with an SSD.

With an SSD you’ll forget many of your games ever had loading screens, and you may see a big boost in performance and framerate. Literally every action will feel a bit (or a lot) snappier and more responsive.

When is an HDD Worth It?

As wonderful as SSDs are, they do have a few downsides compared to HDDs. The first one is obvious: price.

You’ll be hard-pressed to find an SSD that offers the same value (in $/GB) as all but the most expensive HDDs, so you may be stuck with an HDD if you can’t find an SSD that fits both your budget and your data storage needs.

The second disadvantage SSDs have compared to HDDs is tied to pricing: storage capacity.

While you can technically find SSDs with capacities well into the TBs, the larger SSDs are too expensive to be practical for many users. HDDs offer much more storage space for the price, so an SSD may not be the right call for you if you need those extra TB of storage space.

Truthfully, there aren’t many modern cases where you’d want to stick with an HDD instead of upgrading to an SSD. The potential upside is huge, and the benefits are more than enough to outweigh SSDs’ greater cost and lower capacities.

Hopefully you’ve seen enough to convince you that SSDs are worth it, but you may still have a couple of concerns you need addressed. Maybe you’ve heard that SSDs aren’t as reliable or long-lasting as HDDs, and that vague but ominous information is holding you back from pulling the trigger.

Are SSDs Reliable and Long-Lasting?

The first SSDs to hit the consumer electronics market suffered from a few major drawbacks: Price, capacity, longevity, and reliability.

We’ve already talked about the price and capacity—both of which have improved over the years—but have SSDs’ become more reliable and long-lasting since they were first introduced?

Early SSDs suffered from limited write endurance, meaning data could only be written to their NAND flash cells so many times before the cells wore out and stopped working entirely.

Newer SSDs sport improved flash cells and utilize a number of techniques to minimize wear and tear, and the results speak for themselves. Modern SSDs also boast endurance ratings of 3,000 TBW (terabytes written) or more, which should be more than enough for the vast majority of users.

Determining whether SSDs last as long as HDDs is a bit tricky, as you’ll get different answers depending on where you look. Some say HDDs and SSDs have very similar failure rates and overall lifespans—between 5 to 10 years—and others say that SSDs are more likely to fail earlier due to their write limits.

This (not quite scientific) study by Backblaze, a cloud storage company, was referenced by many online publications as evidence that SSDs are slightly more reliable than HDDs, but the accuracy of the study is up for debate.

For now it’s probably safe to assume you’ll want to replace your SSD about as frequently as you’d replace an HDD: About every 3 (if you’re being extra cautious) to 5 years.

And since HDDs are infamous for slowing down as they fill up, chances are a 5-year-old SSD will still perform much better than an HDD of the same age.

Data storage technology has come a long way in the last century. It all started with punch cards, then moved to magnetic drums, magnetic tape drives, and magnetic cores, and floppy discs, none of which could store more than a few KB.

The advent of the personal computer kicked the development of data storage technology into high gear, and soon the floppy disc was supplanted by miniaturized hard drive discs that offered faster data transfers and greater storage capacities.

Hard drive technology proved to be as malleable as it is durable, and the drives’ capacities grew exponentially even as their form factors became more compact and portable. As programs grew in size and complexity, however, it became clear that even hard drives with the faster SATA interface couldn’t transfer data quickly enough to meet the ever-increasing needs of modern software.

Users would only put up with minutes-long bootup sequences and interminable loading times for so long, so manufacturers began the search for a viable replacement for hard drives. Much to their (and everyone else’s) surprise, the solution didn’t come from some futuristic new development, but from a technology that was first pioneered in the 1970s: Solid-state drives.

Solid-state drives spent decades as the exclusive purview of researchers and forward-thinking businesses with big mainframes and bigger budgets.

This began to change when the first patent for a flash-based SSD was filed in 1989, but it took almost another twenty years for the technology to become affordable and ubiquitous enough to actually pose a threat to HDDs’ dominance of the consumer data storage industry.

SSDs have been steadily gaining in popularity as their capacities have grown and their prices have dropped. More and more new laptops and prebuilt desktops come with SSDs instead of HDDs, and fewer and fewer computer hobbyists are choosing HDDs as their main data storage.

SSDs are worth paying for. They may be slightly more expensive in terms of $/GB, but they more than make up for the added price with their insane read and write speeds, especially if you opt for a PCIe NVMe SSD.

It’s hard to overstate just how much an SSD will improve your computing experience. It’s hard to adequately explain how much better they feel to use than HDDs, and we definitely recommend that you experience that for yourself. 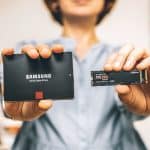 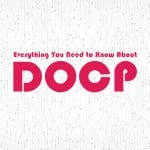