Wondering how a motherboard can bottleneck a PC? Or maybe you suspect your own motherboard is currently bottlenecking your system? We can help you figure it out!

Generally, a motherboard is usually only a bottleneck if it is struggling with overclocking or if it is simply too old to support newer components. Most inexpensive, simple motherboards don’t handle high voltage overclocking well and an older motherboard probably won’t be compatible with the latest CPUs or other important components.

Additionally (and thankfully), motherboards are usually one of the most reliable components within a PC, so they are rarely the culprit when an aging PC starts to decline in performance.

If you’re worried that your motherboard may be dying, definitely check out our guide to Motherboard Lifespan & The Symptoms of a Failing Motherboard.

All that said, there are absolutely some different ways motherboards can bottleneck your PC. We’ll cover all of them and also give you some helpful tips to help you identify these bottlenecks in your own system.

When is a Motherboard a Bottleneck?

There are really only a couple of situations in which a motherboard would prevent your computer from reaching its full processing potential: Overclocking and upgrading.

Motherboards aren’t quite as active in the computing process as the components it connects. They’re more like facilitators that help the other components talk to each other, so most of the time they don’t have much of an impact on performance.

Note – If you’re concerned about your system underperforming, we also recommend looking over our guide to How to Determine Whether You Should Upgrade Your CPU or GPU First.

Overclocking is a process that lets you push your CPU to perform faster than its manufacturer intended, usually by changing a multiplier in your PC’s BIOS. Manufacturers tend to limit how fast their CPUs can go, but those limits aren’t always based on the CPUs’ capabilities.

See, every batch of processors comes out as a mix of good, bad, defective, and weird CPUs, but manufacturers want them to all perform the same for simplicity’s sake, so they artificially lower the performance of the good and average processors to be more in line with their less-talented siblings.

Overclocking lets your CPU slip those manufacturer-imposed limits and unleash its full power, sometimes boosting its performance by up to 20% or more, depending on the processor.

If you’re wondering about your own CPU’s capabilities, take a look at our guide to How to Tell If Your CPU Is Overclockable (Or Already Being Overclocked).

How do Motherboards Affect Overclocking?

If overclocking seems too good to be true, well, it kind of is. Overclocked CPUs require more power, generate more heat, and can cause system instabilities or even full-on crashes in some cases. Some of the issues come from pushing CPUs too hard, but some can be either mitigated or exacerbated by how good their respective motherboards are at heat and power management.

Note: We also have a special guide to overvolting and a guide to undervolting. These are more advanced motherboard-reliant power tweaks, so looking into these options can also help you figure out what your motherboard is really capable of.

Overclocked CPUs require more power, and not all motherboards can handle the increased voltage. Some—especially older or cheaper boards—may even be so bad at managing the extra electricity that they inadvertently short out the PC’s other components.

Though the risk of shorting other components isn’t very high, you’d still be much better off with a motherboard that has an advanced voltage regulator module of you’re planning on overclocking your CPU.

Increased voltage doesn’t just come with the risk of shorting or system instabilities. Computers can’t use all the electricity that passes through their circuits; some of the energy leaks out in the form of waste heat.

Computers have a few different ways of dealing with the heat—fans, ventilation, liquid cooling, automatic speed throttling and voltage reduction, etc—but most are designed around CPUs running at their standard speeds.

So while a motherboard won’t have a direct impact on your computer’s overclocking performance, it can absolutely make overclocking your CPU safer and help manage the excess heat that comes from the added voltage and increased activity.

The other main way a motherboard might bottleneck your system’s performance is by limiting your ability to upgrade your PC. It makes sense if you think about it: Motherboards are built to be compatible with parts currently on the market, so there’s only so much manufacturers can do to ensure compatibility with components that come out years later.

A motherboard built in 2010 probably wouldn’t be compatible with a GPU built in 2021, for instance, and the same applies for just about any other component that was released in the last few years.

Part of the issue comes from the motherboard’s PCIe slots (and things like M.2 slots). PCIe slots—short for peripheral component interconnect express slots—are the physical slots that connect your PC’s components to the motherboard. They come in four different configurations—PCIe x1, x4, x8, and x16—with PCIe x16 having both the most connections (16 of them) and the highest bandwidth.

In other words, a motherboard with older PCIe slots won’t be able to keep up with the amount of data modern components transmit.

A motherboard without adequate PCIe x16 slots of the latest generation will constrain the performance of more modern components. If you have a brand-new GPU and an older motherboard, for instance, there’s a decent chance that the inadequate transfer speeds will prevent your GPU from hitting its full potential.

The same goes for RAM: if your RAM supports DDR4 but your motherboard only supports DDR3, your RAM will be forced to operate at those slower speeds.

You can technically upgrade your system without buying a new motherboard, but that’s really not advisable unless your motherboard has adequate PCIe slots of the current generation. If not, there’s a pretty good chance your new components won’t perform the way you want them to, and you may not even be able to install or use the parts you’ve invested in.

There’s one other aspect of a motherboard that can constrain your system’s performance: Its chipset.

Chipsets are collections of computer chips and circuits built into the motherboard that facilitate and regulate communication between the CPU and the other components, as well as helping to determine which components the motherboard will support. They used to be comprised of physical chips placed around the motherboard, though nowadays they’re positioned more centrally.

CPUs have also started taking over some of the functions that were traditionally within the chipsets’ purview, though chipsets are still essential parts of every motherboard.

Chipsets are crucial but easily overlooked components of every motherboard. You may not notice your motherboard’s chipset at all when it’s working as desired, but you’ll definitely notice when your new components don’t work or when a shorted circuit prevents your CPU from communicating with the other parts of your computer.

You can usually find out which chipset a motherboard has by checking the combination of letters and numbers that comes after the board’s brand name, and you should be able to find details online with a simple search.

We have a guide to CPU Lifespan to help you determine whether or not it might be time to look into newer CPUs. It covers the signs and symptoms of a failing CPU, along with tips for know how long it takes for most CPUs to become obsolete in terms of current tech.

Every major component in your PC is critical to its functioning and performance. Think of it like a sports team: each component has a different, specific function, and none of them can perform their functions properly without the others. They can make some serious magic when they all work as a team, but things kind of fall apart when one or more members aren’t pulling their weight.

Think of a baseball team being held back by a terrible pitcher, or a hockey team with a goalie who can’t stop the puck; it doesn’t matter how great the rest of the teams are, all it takes is one bad player to hold everyone else back. It’s the same with computers.

Bottlenecking is a term used to describe a phenomenon in which a PC’s performance is constrained by one or more underpowered components. For example, let’s say you updated your system with a cutting-edge processor and tons of RAM, but you decide not to upgrade your old hard drive to a newer solid-state drive.

That old hard drive’s low read/write speeds will essentially become your system’s max speed, and your new, more powerful components will basically just have to wait for grandpa HDD before they can do their thing. The same is true of your PC’s CPU, RAM, occasionally GPU, and, as we’ve covered here, your motherboard.

A good motherboard is an essential part of any decent PC. A good board won’t just give your PC’s parts a nice, comfortable home, it’ll also facilitate and regulate communication between components, protect your sensitive parts from excess electricity, and even help manage excess heat when overclocking your CPU.

Your board won’t necessarily actively boost your system’s performance, but a bad or aging board can absolutely hold your PC back.

Older PCIe slots can restrict the performance of newer components, older chipsets can make your system incompatible with the parts you want to use, and poor voltage regulation and heat management can make overclocking dangerous or ineffective. Most of this only comes into play when you’re upgrading your PC’s components, though it’s still worth considering before you decide whether to keep your old board. 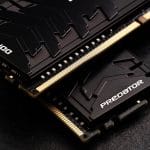