Wondering if (or how long) you can run a CPU without a heat sink? We’ve got you covered!

If you’ve ever replaced the CPU in your computer, you’re probably familiar with the annoyances of the heat sink mounted to it.

First of all, it’s not always obvious how to even get the heat sink off of the CPU, with different variations of clips, screws, and other mounting systems that vary from one motherboard to the next.

As a rule, heat sinks are a necessary annoyance and without one, your computer will likely only run for about 3-5 seconds. Overheating and damage to your CPU are very real possibilities. The only safe, viable way to eliminate the need for a heat sink is to invest in a liquid cooling system.

Additionally, heat sinks require thermal paste (which is important) but can be messy and needs changed every time you remove the heat sink.

In this article we’ll cover everything you need to know about heat sinks and running a system without one.

We’ll also talk about why users are constantly searching for heat sink alternatives and we’ll list some ways to mitigate the issues posed by heat sinks.

Why a Heat Sink is Necessary

Before the 1990’s, CPU’s were much less powerful; they contained fewer transistors, ran much slower and therefore generated far less heat. For that reason, heat sinks weren’t typically required.

If you’re wondering how hot your CPU can get before damage occurs (or how to monitor the temperature), we have a guide specifically to avoiding CPU overheating.

Often the circuit board would have an area of copper under the CPU which would serve to absorb and dissipate the waste heat.

As advances were made in CPU technology and performance increased, CPU’s began to generate such high amounts of heat that heat sinks became necessary in almost all computers.

These days, the software that most users require simply can’t run on a CPU that wouldn’t require a heat sink.

If you were to attempt to run your CPU without a heat sink, you wouldn’t get very far. The most likely thing that would happen is that, within seconds after powering up, your system would protect itself by going into thermal shutdown.

Your computer’s motherboard has one or more sensors on it to monitor the CPU temperature. When that temperature surpasses a certain threshold, the motherboard’s BIOS (Basic Input/Output System) recognizes this as a dangerous condition and forces the CPU to shut down.

Some motherboards allow the disabling of thermal shutdown, but this is not recommended. If you were to disable thermal shutdown and try to run your CPU without a heat sink, one of two things would happen.

If you were lucky, the CPU would malfunction within seconds and trigger a reboot or shutdown.

If you were unlucky, the CPU could actually be destroyed within seconds. This is how significant and dangerous of a problem self-heating is within the CPU.

At this point we’ve established that for the vast majority of computer systems, we’re stuck with using a heat sink. But why exactly is the heat sink so important? We’ll discuss that next.

How a Heat Sink Works

The job of a heat sink is to absorb heat from your CPU and then disperse that heat into the air. The “absorption” part of that equation is relatively simple: physics dictates that the heat naturally travels from the CPU case (made of metal) to the heat sink (also made of metal).

The “dispersion” part of the equation is why you always see many thin “fins” on a heat sink. Heat is transferred to the surrounding air by convection, which basically is the tendency for hotter air to rise into a region of cooler air.

The more surface area that’s provided for the hot-to-cold transfer, the better convection works. Heat sinks maximize this surface area by the use of their fins.

Heat sinks have become the default method of CPU cooling because of their simplicity and low cost; after all, air is cheap!

The Problem with Heat Sinks

One issue that heat sinks have is that they aren’t always up to the task. If you have a high performance system with an overclocked CPU (check out our guide to determining whether or not your CPU is overclockable) or multiple graphics cards, it may be difficult to keep your CPU cool enough.

Another problem with heat sinks is that they must be kept clean in order to work. Over time, the many fins on the heat sink inevitably become clogged with dust. If this dust isn’t removed it severely degrades the heat sink’s ability to transfer heat into the surrounding air.

The last and arguably most significant problem with heat sinks isn’t actually the heat sink itself; rather it’s the fact that heat sinks often require fans. Fans improve the convection even more and move the hot air from the heat sink out of the computer case.

The problem with fans is that they create noise. In some applications it’s desirable to have the computer be as quiet as possible.

For instance, maybe you’re using your computer as a media server and don’t want fan noise to interfere with your movie-watching experience. Maybe you’re doing music production and the constant hum of the fan is noticeably audible in the background.

For these and other reasons, you might be constantly searching for ways to improve on the heat sink/fan system.

There are a couple of things you can do to either decrease the size of the heat sink required, decrease required fan speed to decrease noise, or even possibly eliminate the need for fans.

One solution is to use a CPU that is less powerful. While this may sound counterintuitive or undesirable, think back to our earlier discussion; as CPU’s became faster and required more power, they required more cooling. It therefore stands to reason that dialing down performance to the minimum that you need will help you reduce your cooling needs.

Usually, CPU’s that are less powerful use less electrical power. For that reason, they often actually have higher maximum temperature ratings, meaning the highest temperature they can safely operate at.

The second solution is to dial down performance another way – by underclocking. Underclocking, or “downclocking”, is the practice of limiting or reducing the frequency your CPU operates at.

As this frequency decreases, the power dissipated by the CPU also decreases, leading to less heat generation. Another closely-related topic to underclocking is undervolting, in which the operating voltage supplied to the CPU is reduced. This also leads to lower power dissipation and therefore lower temperatures.

You can use various software programs or adjust your BIOS settings to perform both underclocking and undervolting.

How to Eliminate the Need for a Heat Sink – Liquid Cooling

If none of these ideas sound palatable to you, there is another way.

If you truly want to dispense with your heat sink and not ruin your CPU, you can invest in a liquid cooling system.

Just as heat sinks and fans use air to cool the system, liquid cooling uses water or another liquid coolant to transfer heat out of the CPU. The liquid is pumped around the system via tubes and ultimately into a radiator, where the heat is dispersed into the air.

The advantages of liquid cooling are many:

The Future of Heat Sinks

Work is constantly being done to improve on the limitations of heat sinks and reduce the headaches they cause.

Currently most heat sinks are made of copper or aluminum, but some heat sinks have other material, such as diamond, added to them. These materials are more efficient at transferring heat and therefore yield a higher-performance heat sink at a reduced size or weight.

Even more exotic materials, such as graphene and carbon nanotubes, are being experimented with in order to develop increasingly efficient and higher-performance heat sinks.

Hopefully this article has informed you of what heat sinks do and why they are so important.

As we’ve discussed, there are ways to decrease the amount of cooling needed by your system and therefore the size of the heat sink you require.

If you really want to do away with the heat sink altogether, liquid cooling is an option you may want to investigate.

In the future, heat sink technology may improve to the point where the limitations and annoyances become negligible. Until then, the humble metal heat sink remains the simplest, most cost-effective way to keep your CPU cool and safe. 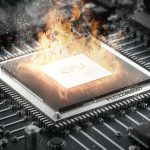