Wondering about thermal paste lifespan and how often you need to change it? We can help!

Thermal paste is an important component in the heat flow of your computer system. It allows the heat generated by the CPU to be transferred to the heat sink and ultimately to the air where it is removed from the case via fans. It does so via a property called thermal conductivity, which defines its ability to transfer heat.

Thermal paste, however, has a shelf life.

This guide will familiarize you with factors affecting the lifespan of thermal paste and help you know how to determine when it’s time for some fresh paste.

The lifespan of an unopened container of thermal paste is generally 3-5 years. If your thermal paste specifies a shelf life, use that as your guide. If not, it’s safe to err on the side of caution and not use any paste that you’ve had for more than 3 years.

Remember too that when you buy paste you don’t know how long it’s been sitting on the shelf. For this reason it’s a good idea to purchase paste from larger retailers who have a higher turnover rate.

You will likely never use an entire tube of thermal paste at one time. A good rule of thumb is to not use an open container that you’ve had for over one year.

Some enthusiasts buy a new tube of paste each time they apply it, which is what we recommend. For quick recommendations on which type of thermal paste to buy, check out the guide we created specifically for thermal pastes.

The usage life of a respected brand of thermal paste is 1-3 years. If you think your paste might be of low quality or if it’s a brand that you don’t recognize, it’s a good idea to replace it after 6-12 months.

Respected brands include, but are not limited to, Arctic Silver, Noctua, Cooler Master, and Thermal Grizzly.

If you’ve purchased a motherboard with the CPU preinstalled, it’s also recommended to replace the paste after 6-12 months since many manufacturers use inferior quality paste.

Finally, it’s recommended to remove the old thermal paste and apply new paste every time you remove the heat sink from the CPU. The reason for this is that when the heat sink is removed, the paste separates and forms stiff peaks on both it and the CPU.

Then, when the heat sink is replaced, the uneven distribution of paste creates air pockets, which are extremely poor conductors of heat.

Whether it’s sitting in a sealed container on the shelf or squished between your CPU and heat sink, thermal paste becomes less effective over time. Here are a few ways in which that happens:

Thermal paste consists of two layers – a “bonding” layer, which gives it its liquid-like properties, and a “filler” layer, which provides its thermal conductivity.

The bonding layer can consist of various types of silicones, urethanes, epoxies and acrylates.

The filler layer could be any combination of thermally conductive materials such as silver, aluminum, ceramic, diamonds, etc.

For example, a metal-based paste might be small particles of silver ground to a fine powder and mixed with the filler layer. At high temperatures these two layers tend to separate. This leads to poor wettability of the paste, which is its ability to main contact with the metal surfaces of the CPU case and the heat sink.

To understand this, visualize water on a car windshield consolidating into separate drops. You don’t want your thermal paste to look like this; you want it to be a thin, smooth layer. If the paste is not evenly distributed, its thermal conductivity is greatly reduced.

Pump-out is a bit of a strange phenomenon, but very real.

As the temperature of both devices increases, they actually undergo a small amount of expansion, but they do so at different rates, causing movement and redistribution in the thermal paste layer.

When the computer is powered off, the CPU and heat sink both contract, again at different rates, causing further movement and redistribution in the thermal paste. As this happens repeatedly over many power cycles, the paste is effectively “pumped out” from in between the CPU and heat sink.

The loss of paste leads to decreased thermal conductivity between the devices.

How to Replace Thermal Paste

If it’s time to replace your thermal paste, the first thing you’ll need to do is remove the old layer of paste from both the CPU and heat sink.

The old paste may be dry and cracked with an uneven surface, which is a clear indicator that it’s not transferring heat effectively. If you were to simply apply new paste over this old layer there would be numerous air gaps between the CPU and heat sink which would also severely degrade the thermal conductivity.

In order to remove the old layer of paste, you’ll need a cleaning substance that can properly break down the paste without leaving a residue. You have your choice between a few different ones: isopropyl alcohol, acetone, or ArtiClean (a branded cleaner). If using isopropyl alcohol, try to get the highest percentage of alcohol you can. The more alcohol, the less residue will be left over after cleaning. At least 70% alcohol is recommended, but 90% and higher is preferred.

Never use oil-based cleaners, because they will leave an oily residue, and oil has a poor thermal conductivity. Another source of oil is the surface of your fingers so it’s best to avoid touching the CPU and heat sink directly. Use a Q-tip or a lint-free cloth to apply the cleaner to the metal surfaces and rub away the paste.

Keep applying cleaner and rubbing with a clean Q-tip or section of cloth until all of the paste is removed. If, after several cleanings, some of the paste refuses to budge, you’ll need to do some gentle scraping.

Keep scraping until all of the paste is removed, and then apply a bit more cleaner to rub away any residual paste. The surfaces are now ready for new paste.

Apply a pea-sized amount of new thermal paste to the center of the CPU case. Resist the temptation to use a larger amount, since adding too much paste will actually degrade thermal conductivity. The reason for this is that the thermal conductivity of thermal paste is better than air but worse than copper, which is what the surface of the CPU case and heat sink are made of.

Remember, thermal paste is used to fill in microscopic air gaps in the copper-to-copper interface, so you only want a very thin layer of it.

Next, install the heat sink back onto the CPU. As the heat sink is pushed down onto the CPU case, the paste will spread out over the surface into a uniform layer. Resist the temptation to remove the heat sink and check how the thermal paste is distributed – this will only ruin the nice, smooth layer of paste you’ve worked so hard to achieve!

A Warning About Metal Thermal Pastes

The application method described here is appropriate for most thermal pastes, with the exception of liquid metal types. These pastes are far less viscous and they flow more easily over the surface of the CPU. If you apply too much, the paste can easily flow over the edges of the CPU and onto pins and other unwanted electrical contacts.

Since these pastes are electrically conductive, that would be very bad for your computer system, potentially creating destructive short-circuits.

If you are using a liquid metal paste, you should apply the smallest amount possible to the CPU – think a “pinhead-sized” amount. Then, spread the paste uniformly around the surface of the CPU with a Q-tip or a foam applicator supplied with the paste.

Alternatively, you can also apply the paste to the Q-tip or applicator and then transfer it to the CPU. This will help to ensure that no paste flows onto unwanted surfaces.

In this article we’ve discussed how and why thermal paste loses its effectiveness over time. The lifespan of your paste will vary depending on the quality of the paste and even how many power cycles it’s been subjected to.

When you decide it’s time for fresh paste, it’s usually best to spring for a brand new tube.

While it’s tempting to grab that open tube of paste you used a few years ago, it’s not worth risking the health of your system.

Follow our tips to remove the old paste and apply a fresh, even layer of new paste. It’s the easiest thing you can do to ensure your system stays cool and operates at peak performance. 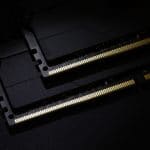